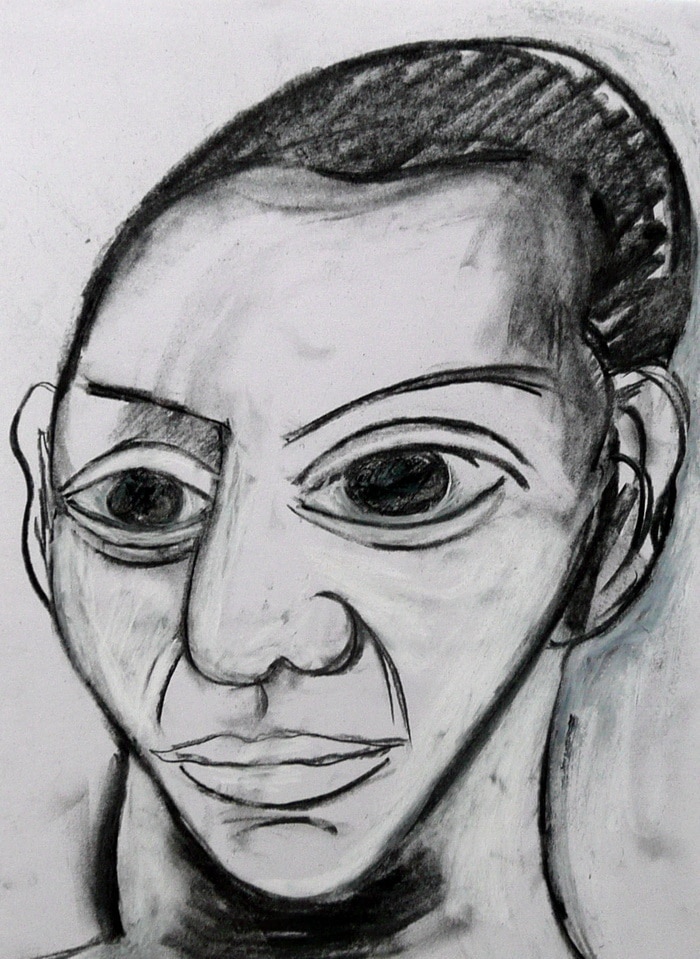 I do have a few ideas borne from experiencing my chaotic passions and I often think that being a Spaniard, a woman and a painter I mirror myself very much in Picasso’s character, hence why I have attempted to say something about him and his work.

During my formative period I had a residency in Amsterdam. Cultural differences collided with the Dutch School of painting and I almost went mad. What I learnt from it was that when one is in an extreme state of pain some strange awareness opens up and you learn things.

At that time I had a fascination for the physical body, I was doing a lot of exercise and eating/sleeping very well and had beautiful men flying around me. Yet my emotional involvement with them was a total mess, therefore I tried to separate in my mind the body functions from the thinking emotional process.

I had a job cleaning hotels and swimming pools at the time. Shit became important. I realised that the human body is made of shit and so is this planet. There seemed to be two types: moving shit, while there is energy inside (soul?) and non-moving shit that returns to the planet when the energy goes (death). The body being a sack to contain this shit and with 9 holes to keep it moving. The principle of the Alchemist trying to transform shit into gold by “using” the holes fully, made sense to me. A perfect balance between the functions of the holes could transform matter into spirit (God?). I took some excrement and urine and had them in a glass for days observing them. The fumes, the smell, the colour and changing texture. There was a moment, which I thought that some sort of vacuum was taking place and that the glass would explode. I thought of the big bang; the beginning, if there is such a thing. Then I thought that if I was to eat and drink them I could exist without need for anything else.

My room was very small and to use the space I had fully, as I had no studio elsewhere, I hung my bed with four chains in the ceiling, which had beautiful wooden beams. Pinned up on the wood I had a series of post cards of mostly African statuettes of gods and goddesses. Big phalluses and vaginas everywhere. The little Venus (from Lespugue 22.500BC) in the Museum of Mankind in Paris was one of them. During many hours I lied on my bed looking at those.  At times I would play with my own genitalia looking at them. Images kept on coming to my mind, strange things, revelations, I felt as if I was Moses and God was giving me the 10 commandments. Letters, I understood, were circles and sticks. The alphabet was nothing other than ordered circles (vaginas) and sticks (phalluses). Then I started to see triangles, squares, rectangles, and circles everywhere. I read Euclid’s theories. It all made sense then, although I could not explain it now. I understood how form came about starting from a minute dot (bacteria) and developing into geometrical forms. I also had a big spider, which I found, at some lavatory from the Hotel. Hence the dot becoming alive. Wherever and whatever thing I looked at, was constructed within the limitations of the geometrical form. I then thought of Cézanne. This is why I do not understand abstraction. The body itself being made of such combinations of forms. Also I wondered why is a particular curve erotic and another one feels revolting. When I think of the male body and its curves. If I compare a Japanese wrestler with a sculptural Jamaican young man, the first revolts me the second I desire. Yet they both are made of curves. Here is where I think of Picasso’s Demoiselles and of some of the drawings he did prior to painting that painting.

Perhaps it as all my imagination, but those drawings seem to be about this. When he was in Gosol he drew himself as an empty vessel. Some of the images of females drawn around this time were also empty vessels. He tried to work out the female body from the shape of his phallus. Using geometrical forms as well as the shape of amphoras and calculating distances from the different joints of the body trying to work out proportions. He also drew people from Gosol, there was an old man especially, from which I think he developed the image of the face of the woman sitting at the bottom right hand corner of the Demoiselles. I can imagine that on those days villages like Gosol where life was very hard, people physically resembled ancient Africans. I noticed this myself when I visited remote villages in the mountains around my own village. Physical suffering makes people look very primitive; there is a controversial beauty in it. Benin’s statuettes have it very much. On the other hand, extreme emotional pain forces you to dig down inside yourself  and to return to bare basics,  searching for clues to explain the dynamics of those emotions and therefore stop the pain. Kafka talks about this in a similar way in his book “The Penitentiary Colony”.

The first signs of we as humans are in Africa. I am wondering if through this emotional journey which I think Picasso went through, as I explain later on, and what he saw in Gosol (helped by his visit to the African museum in Paris) he touched (with that painting) the dividing line between the hooker and the Madonna. The point at which ugliness becomes beauty and a new avenue opens up. The curtain behind the women in the painting looks to me like a vagina, and it is red… He did preparatory drawings of that curtain, which look like vaginas anyway.

It seems to me that Picasso was a very isolated person. I can understand very well how he felt as a child being moved around from Malaga to Galicia, then to Barcelona. All the confusion of identity, which is a very important issue in Spain. The Andalusians hate the Catalans and vice versa. In those days Spain was very poor. Poverty seems to be a detonator for pride and honour. There are sides to both that are good but there are sides that are ugly and horrible. The desperation of survival produces people like Abdullah Ocalan, or the IRA or ETA for this matter. Spain is an extremely rich country in terms of culture.  When I was a child I always wanted to be part of everything, I adored bull-fighting and flamenco dancing, but sadly as Franco imposed them to everyone, in an attempt to abolish any other form of cultural identity which did not agree with what he understood as Spanish, the natural reaction from the cultures that he was trying to censure was to ridicule and condescend at flamenco and bull-fighting. The Catalans tried to teach their children to dance sardana instead. It was for me a great dilemma to have to come to terms with my feeling bored with the Catalan dance and my love for the Andalusian one.

I can imagine that Picasso having lived for years in Spain’s different cultures, he developed similar likes and dislikes. Palau i Fabre talks about Picasso’s accent when he spoke Catalan, apparently he had the accent of Lleida. A Malagueño with a Lleidatá accent is like a Scottish person speaking Cockney in the middle of West Byfleet in Surrey. Being different turns you into an oddity and therefore you are always in no-man’s-land, hence the isolation and the need to find some answers for it. Of course the Franco-nightmare did not start until he was already 45 years old, and by then he was mostly in France, but I can imagine that he was always pestered by relatives and friends about his national and political identity. Then there was his father who seems to blame him for his failure as a painter. The weight of the Spanish family structure built on thick catholic guilt, haunts you to the grave.

Then he had to endure the death of his sister, followed by the suicide of Casagemas. It must have been very hard to bear. Palau i Fabre wrote about all this, he knew him quite well it seems. Barcelona with all its beauty is a trap. Much more so at the time he was there. In the Picasso Museum in Barcelona there are several paintings of roofs done around the time of his sister’s illness and death. The feeling of loneliness is unbearable. Then came his obsession for pink and blue. I often wondered why pink and blue. Babies when they are born are placed in a cradle and dressed with clothes which are pink or blue depending on whether they are male of female. For some strange reason this tradition is followed in many cultures all over the world.

In Amsterdam I was seeing shit everywhere, and I was obsessed with the body functions, I started to see Van Gogh’s still lives as an illusion of “matter” transforming itself. The way he used paint and the way he depicted his subjects: faces, trees, water, flowers etc. His paintings seemed to be a breeding surface where everything was alive without hierarchy. There is no difference between a tree or a human or the sun. All his images breathe in harmony like a symphony.

Picasso’s imagination could produce images non-stop. If he had some excitement inside, a red or a yellow on the surface of the canvas could become a living thing. So much has been said about his personal life, yet my own experience as a painter and being very much a woman proves that he was above all a passionate man addicted to the urge of life and therefore unable to ever compromise.